La Voix, my new CD with violinist Callum Smart, is out now on Orchid Classics. 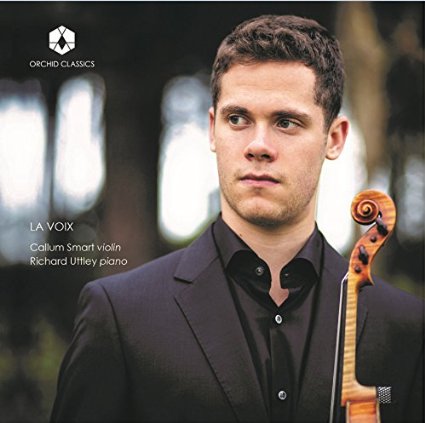 Here’s our introduction to the repertoire:

The starting point for the disc was French music for violin and piano, but a theme that emerged as we rehearsed and explored these works was that of the voice. As such, we decided ‘La Voix’ would make a fitting title. A vocal quality is central to all of this music, and each piece speaks or sings with its own particular type of voice. Poulenc’s Sonata has a distinctly Spanish accent, and at the same time as being a commentary on the tragedy of war, it demonstrates Poulenc’s feelings for one of Spain’s great literary talents, Federico García Lorca. The Fauré is nothing if not an extended love song, and a highly personal one at that – Fauré had hoped (in vain, alas) that it would help him woo Marianne Viardot, the sister of the work’s dedicatee. The two Ravel pieces, as with the Poulenc Sonata, are examples of a composer adopting the voice of another and in the process revealing something about themselves – the gypsy music of Tzigane and the sensual hispanic vocalise of the Pièce en forme de Habanera both a kind of tribute to the Basque-Spanish heritage of his mother, to whom Ravel felt so close.