From the programme notes to Occupy the Pianos festival at St John’s Smith Square:

Nat and I began working together on this project when she created the artwork for my forthcoming CD Ghosts & Mirrors. The pieces we’re presenting in this concert all appear on that disc, so this is a sort of live version of that collaboration. I wanted to work with Nat as the aesthetic of her work is the closest thing I could find to a visual representation of my feelings on the atmosphere and concerns of the works I chose to record for Ghosts & Mirrors. Themes explored by the music include hauntings, rebirth, symmetry and warping – all of which are expressed either directly or obliquely by Nat’s images. Our hope in presenting the concert in this way is that the visuals will enhance your experience of the music – highlighting certain details of pieces and setting the tone of the performance, but at the same time remaining sufficiently abstract as to allow the music space to breathe and to leave something to the listener’s imagination. Collaborations of this kind within contemporary classical music have often employed rigorous and detailed synchronisation of the visual and auditory elements, but we wanted to experiment with something more free and suggestive. As such, Nat will ‘mix’ visuals live as I play, responding to the performance as it unfolds on the night, to shifting moods and textures, and to the light as it changes over dusk here at St John’s.

We are very grateful to Help Musicians UK Emerging Excellence Awards for their support of this collaboration. 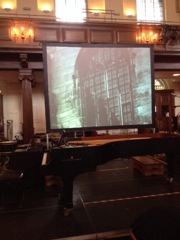 In rehearsal at St John’s