Just back from a great time at this festival, which is part of Music for Galway. As well as the Vaughan-Williams Piano Quintet (an early work of his I did not know, but which turns out to be full of great tunes and passion), I played Stravinsky’s The Rite of Spring in the piano 4-hands version with Rolf Hind. Apparently Stravinsky authorised and even encouraged pianists to play it at two pianos, and it is often done this way, but we did it the hard way – fighting for space at the one instrument! (See below.) There’s a lot to be said for this, and perhaps it adds to the power of the music in some way. I’m delighted we’re scheduled to play the piece again, at a festival of which Rolf is artistic director, at St John’s Smith Square in London. Even though there will be two pianos available we’re planning to do it at one again.

I also made my harmonium debut (!) in the festival, with the chamber version of Debussy’s Prelude à l’après-midi d’un faune, made by one of Schoenberg’s students. This was the one work on the programme that involved almost all the musicians playing in the festival. There was a great atmosphere between everyone, and I was glad to be able to watch when I wasn’t playing. The highlight of what I saw had to be Schoenberg’s Pierrot Lunaire with Lore Lixenberg, who was astonishing in her characterisation and vocal theatricality. The ensemble (with Rolf on piano) were amazing too, so much so I came away desperate to have the opportunity to play this work myself one day. I thought it a major credit to the festival that they supported their new director Finghin Collins in programming all these fascinating and challenging works, and it says a lot that they reported their best audience figures yet. 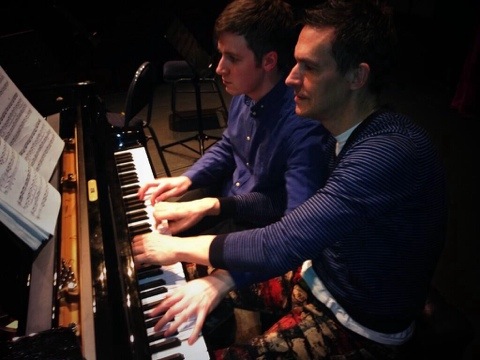 Rehearsing The Rite with Rolf – note the distribution of hands