Wednesday’s launch was reviewed in the Telegraph by Ivan Hewett:

Video was a mixed blessing at the launch recital of Richard Uttley’s new album, Ghosts and Mirrors, says Ivan Hewett 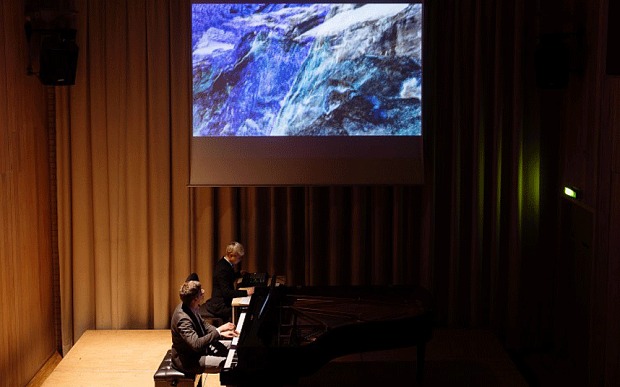 Sound and vision: Richard Uttley performing with video at the launch of his album Ghosts and Mirrors Photo: NAT URAZMETOVA

The “concept album” idea has now firmly taken root in classical music, and this concert was the launch for a fine example of the genre, from young pianist Richard Uttley. All the music on his new album Ghosts and Mirrors is a reflection or echo of something else, such as a long-vanished dance form, a much loved deceased composer, or an image in nature. This concert in the Forge, a cosy little concert hall and bar in Camden, offered an hour-long taster for it.

You might expect a concert full of ghosts and reflections to be pale and melancholic. In fact the predominant tone was sumptuous and glittery and virtuoso. Uttley seemed diffident and mild in his pre-concert chat, but once seated at the piano be became a different person, seizing the music with amazing decisiveness.

He caught the unabashed impressionist gorgeousness of the first Piano Jubilee by Finnish composer Magnus Lindberg, and the way the following five Jubilees retreated down to simplicity. Tristan Murail’s Cloches d’adieu et un sourire (Bells of Farewell and a Smile) was a homage to the greatest post-war French composer, Olivier Messiaen. The spirit of Messiaen seemed to hover in the music’s harmonic glitter, evoked by Uttley with musing delicacy.

Most overtly ghostly of all was Mark Simpson’s Barkham Fantasy, which conjured a whirlwind of anguished virtuosity from a few wispy memories of Haydn and Mozart.

All this offered plenty for our imaginations to feed on. So we didn’t really need the accompanying video for each piece from film-maker Nat Urazmetova. Still, they were a lot more subtle than many performance videos, with Urazmetova controlling the streams of images in tandem with Uttley’s sudden changes of tempo and mood.

As always with these things, the more prescriptive the images the less helpful they were, however beautiful in themselves. One could feel one’s imagination being boxed in. It was when uncertainty crept into the videos that they reinforced the music, rather than competing with it. The drifting black-and-white pan-shots of churchyards worked well for Simpson’s Barkham Fantasy, as did the images of a haunted-looking woman’s face and dimly lit fin-de-siècle interiors for Marvin Wolfthal’s Lulu Fantasy. This was an operatic fantasy in the grand tradition of Liszt, which brilliantly summoned up the vast decadence of Alban Berg’s opera Lulu in 15 minutes. I would never have imagined a mere piano could capture that world, but Uttley’s tumultuous performance soon persuaded me.

Ghosts and Mirrors is released on ARC