“Having packed out Phipps Hall at HCMF last year, pianist Richard Uttley‘s Saturday morning recital found him in the considerably more fitting space of St Paul’s Hall. Taking place on a stunningly cold day—local temperatures hovering around -1°C—the audience was healthy in size but not in general well-being, peppering the concert with (in one case, worrying close proximity) blasts of coughage. Quite apart from anything else, Uttley deserves considerable kudos for the way he tenaciously maintained concentration. Similar to Seth Parker Woods’ recital the previous day, Uttley performed four works, two of which involved technology.

Eric Wubbels‘ Psychomechanochronometer displayed a tense relationship with the top end of the keyboard, which repeatedly acted to initiate a motoric pulse. Beneath this, Wubbels introduced increasing amounts of elaborate floridity, Uttley’s fingers glancing off the keys as though they were red hot. Multiple times the music splintered, losing the pulse (and potentially the plot), flying around the keyboard in such a way as to make one realise assorted strings had been prepared. But that high pulse, modifying itself, could never truly be shaken off, the piece concluding under its influence once again in a series of shivering flurries. Careful, poised placement of notes occupied the formative moments of Chaya Czernowin‘s strange, four-minute fardanceCLOSE. Very low, rich tremolandi were ambiguous as to whether they reinforced or undermined this, and the music’s subsequent eruptions into quasi-quotational fortissimo chords hardly clarified things one way or the other. Their presence made for a curious effect, as though all the assorted pitches played hitherto were suddenly aligned, instantly transitioning from chaos to coherence. It was all delightfully strange. Continuing his penchant for mistreating the Fender Rhodes organ, Michael Cutting extended this with the aid of two reel-to-reel tape machines for the world première of his I AM A STRANGE LOOP V. Four movements ensued, each utilising the tape machines in order to record and play back slowly-degrading loops of what Uttley was doing, forming delicately complex duets and trios. The first and last were exercises in relaxed prettiness, the former using the Rhodes like a vibraphone, striking its pickups with a soft mallet, the latter establishing lovely ambient rotations that were (rather nicely) eventually crudely silenced. The second coated assertive chords with cycling analogue grit and fuzz, while the third, very different, focussed on creating an ever more dense cloud of noise (Uttley now thwacking the pickups), ultimately crushing its pitch content. It was as fantastic to listen to as it was to watch, Cutting demanding a great deal more from a pianist than one might expect. Composer-supposedly-in-residence Georg Friedrich Haas had been strangely and sadly conspicuous by his absence since the opening weekend, so the final piece in Uttley’s recital, Haas’ Ein Schattenspiel (‘a shadow play’) was most welcome. This also involved the pianist interacting with a recording of what they had just played, but in Haas’ case the music is shifted up by a quartertone and becomes the basis for what appears to be a kind of infernal machine, pitting the performer to stay on track and synchronise with the subtly altered renditions of themself. Behaviourally, the piece shifts between strict metrics and more fluid episodes, the latter at one point introducing figurations heavily redolent of Debussy. But it was the dread rigidity that dominated, leading to an exhaustingly brutal denouement with Uttley’s hands pounding the keys as though his life depended on it, and then at the very end silently catching resonances from the middle of the keyboard, but looking for all the world as though he’d collapsed from the sheer effort. Another blinder of a concert from Huddersfield’s most radically lyrical pianist.”

and a mention by Ivan Hewett, who reviewed the late-night concert for The Telegraph:

“… However the two stars of the evening were pianist Richard Uttley, who duetted entertainingly with electronic sounds in Olga Neuwirth’s incidendo/fluido, and soprano Peyee Chen, who floated two early songs by Michael Finnissy into the dark space of Bates Mill with perfect grace.” 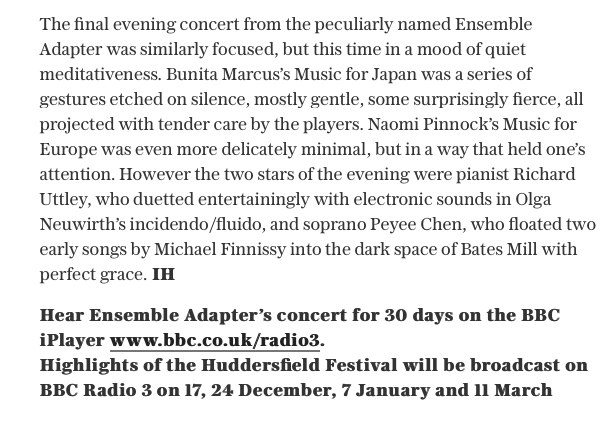