Review of Ghosts & Mirrors, from Robert Hugill for Planet Hugill. 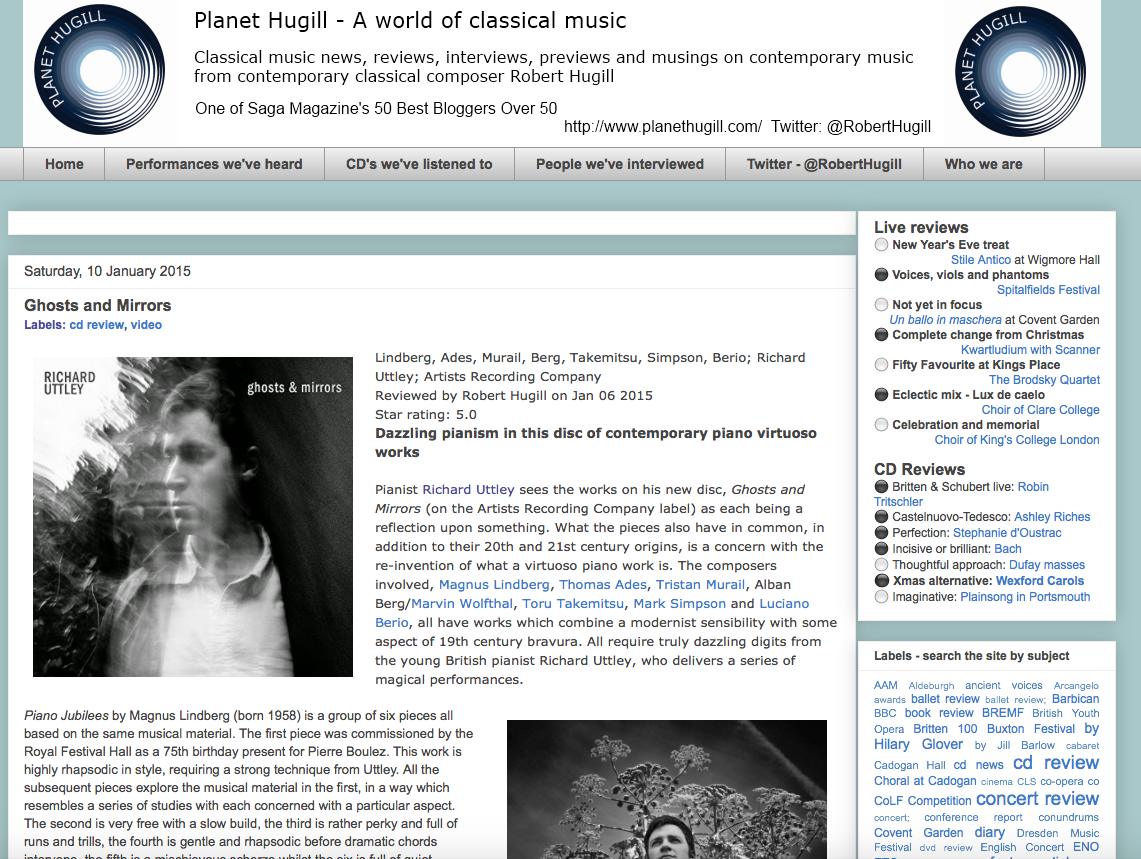 Pianist Richard Uttley sees the works on his new disc, Ghosts and Mirrors (on the Artists Recording Company label) as each being a reflection upon something. What the pieces also have in common, in addition to their 20th and 21st century origins, is a concern with the re-invention of what a virtuoso piano work is. The composers involved, Magnus Lindberg, Thomas Ades, Tristan Murail, Alban Berg/Marvin Wolfthal, Toru Takemitsu, Mark Simpson and Luciano Berio, all have works which combine a modernist sensibility with some aspect of 19th century bravura. All require truly dazzling digits from the young British pianist Richard Uttley, who delivers a series of magical performances.

Piano Jubilees by Magnus Lindberg (born 1958) is a group of six pieces all based on the same musical material. The first piece was commissioned by the Royal Festival Hall as a 75th birthday present for Pierre Boulez. This work is highly rhapsodic in style, requiring a strong technique from Uttley. All the subsequent pieces explore the musical material in the first, in a way which resembles a series of studies with each concerned with a particular aspect. The second is very free with a slow build, the third is rather perky and full of runs and trills, the fourth is gentle and rhapsodic before dramatic chords intervene, the fifth is a mischievous scherzo whilst the six is full of quiet Messiaen-like chords. Despite the music’s technical bravura, this is not frilly stuff. The pieces are edgily powerful, and they receive a consummate performance from Uttley.

Mazurkas, op. 27 by Thomas Ades (born 1971) are three works which extend the mazurka form. Like those of Chopin and Szymanowski, you cannot imagine dancing to these mazurkas. The first explores a lively and rather wry rhythmic figure, the second is fluent with flowing passage-work which explores different clashing regular and irregular metres in the two hands, whilst the final one being full of sparse wisps of sound.

Cloches d’adieu, et un sourirs (In memoriam Olivier Messiaen) is a 1992 work by Tristan Murail (born 1947) in memory of Olivier Messiaen. In writing the work, Murail has left the placement of each note or chord vague so the performer can choose how to respond to the instrument and the acoustic. The overall result is full of transparent atomospherics, with Uttley producing some stunning clarity despite Messiaen-esque clusters of notes (and the odd nod towards birdsong).

The Lulu Fantasy by Marvin Wolfthal (born 1947) is a large-scale (lasting nearly 14 minutes) concert fantasy based on Alban Berg’s Lulu. As Wolfthal explains in his note, much of the material he chose is related to Alwa and the centrepiece of the work is the Filmmusik which is framed by two large sections based on Alwa’s love music, and each interrupted by the Ragtime. This is a complex, richly textured piece in which an element of blues in the background complements the complicated harmony and expressionist lyricism. Uttley’s performance brings a real infectiousness to the work, all the notes are there in dazzling fashion but he also gives the piece shape and sense.

Rain Tree Sketch II by Toru Takemitsu (1930 – 1996) is another work in memory of Olivier Messiaen. It is a lovely delicate yet complex web of magical and ghostly textures. It was Takemitsu’s last work for piano.

Barkham Fantasy by Mark Simpson (born 1988) refers to the place where Simpson was staying whilst writing the work, which was commissioned by Richard Uttley in 2010. It begins sparsely, with a very eerie feel (deliberately so as Simpson had unsettling feelings of being watched whilst writing it), then gusts and swirls of notes blow things away and we get some brilliant drama and a high intensity ending with tremendous tremolos and then nothing.

The final work on the disc, Six Encores is a group of works written over a period (1965 to 1990) by Luciano Berio and which he later grouped together, though anything less like and encore piece I cannot imagine! The first Brin (Wisps) was written in memory of a young pianist, and has an evanescent texture full of delicate finger-work from Uttley. Leaf was written in memory of the London Sinfonietta’s musical director, Michael Vyner and is all repetitive rhythmic fragments interrupted by chords. The final four are depictions of Water, Earth, Air and Fire. Wasserklavier is quietly lyrical. Erdenklavier starts with a single, highly dramatic line which seems to develop and echo, and further complexity result. Luftklavier is all filigree notes in a busy texture, and Feuerklavier is a quiet toccata-like piece with interruptions.

This is a truly amazing disc, as Richard Uttley dazzles throughout with his dexterous finger-work but at the same time keeps the strength and rich complexity of the music. You never feel that we are listening to virtuoso elements just for their own sake. And his control of structure and colour is superb, so that the colouration of the pieces lives up to the disc’s title Ghosts and Mirrors.

Highly recommended for anyone who wants to know what a 21st century version of Liszt would be playing!