Reviews from my recital in the opening weekend of Huddersfield Contemporary Music Festival 2015: 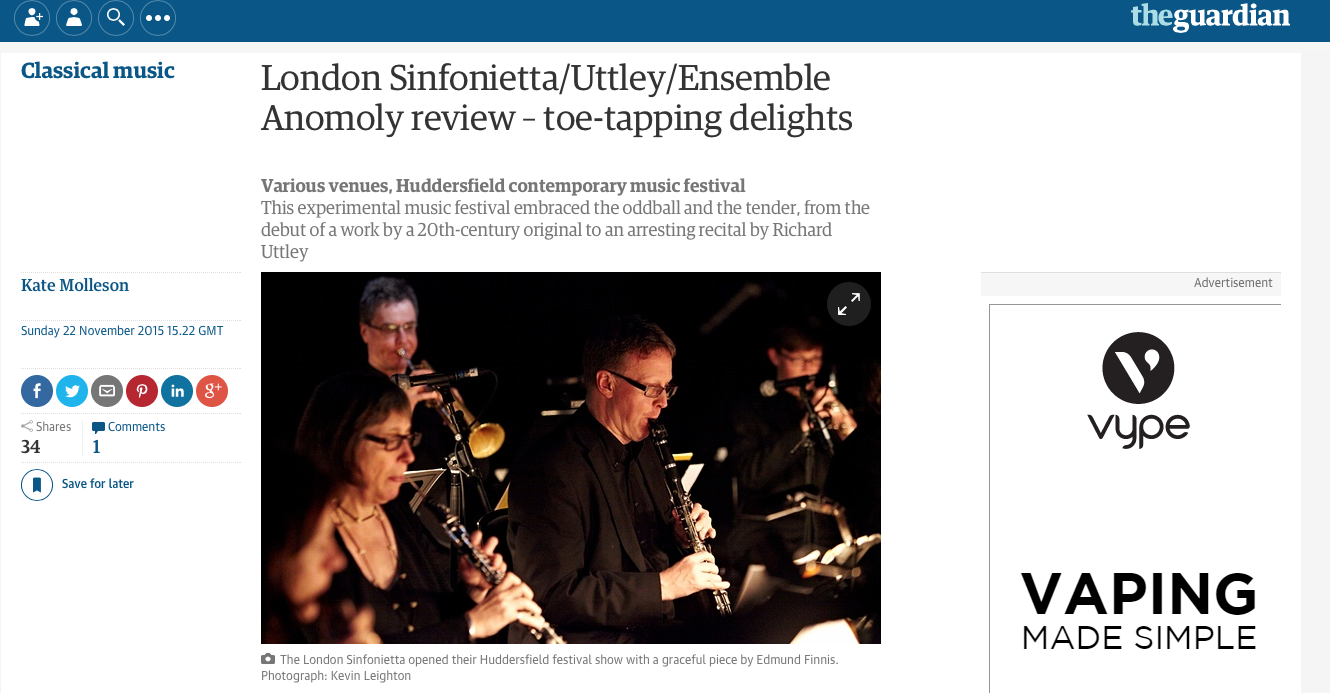 “Some of the day’s most arresting moments came in a recital by Richard Uttley. I was enthralled by his composure, lyricism and ability to hold a moment without forcing it. Tristan Murail’s La Mandragore was tender and soft-hewn; the Michael Cutting’s This Is Not a Faux Wood Keyboard was a surprise five-minute Fender Rhodes marvel.” 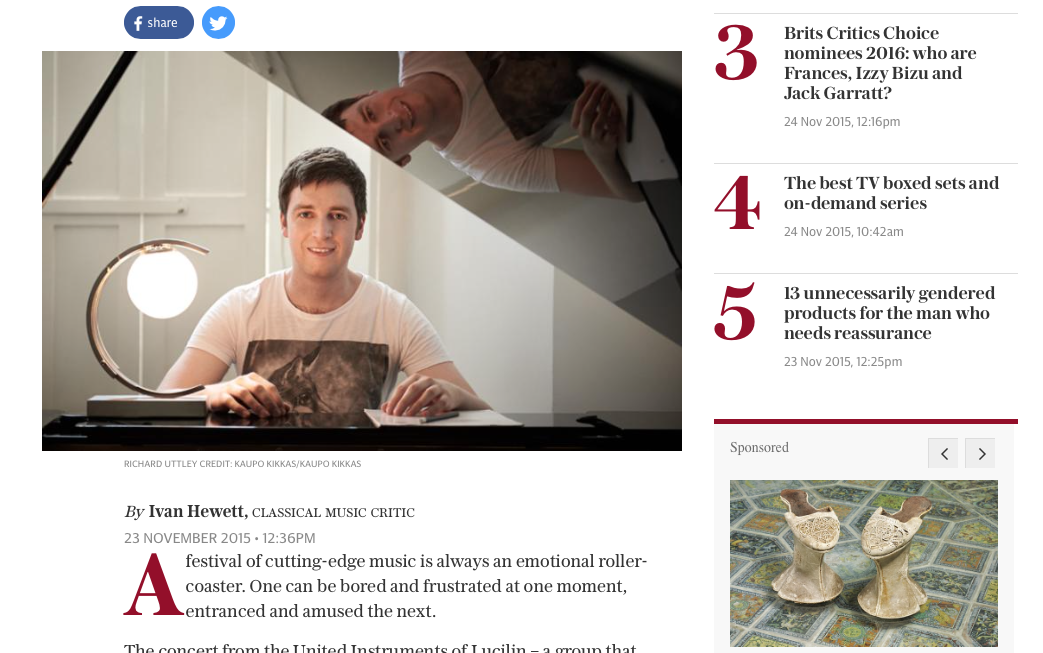 “It fell to the wonderful young pianist Richard Uttley to prove that new music can be aurally refined without being precious. Every piece in his hour-long recital was rewarding, but it was Naomi Pinnock’s delicately reticent Lines and Spaces, its tracery of chords and repeated notes placed in perfect balance, that stole the show.”

“It’s perhaps a little early, following just two concerts yesterday evening, to start describing the characteristics that typify this year’s Huddersfield Contemporary Music Festival. But based on these, and considering the featured composer is Jürg Frey, it would seem that ‘delicacy’ is going to be one of this year’s prevailing themes. In saying it dominated the piano recital given by local hero Richard Uttley, that’s as true of the performer as it was of the music being performed. i wouldn’t use this term of many pianists but, both from a purely aural perspective as well as watching him perform, Uttley comes across like a ballet dancer. His movements are graceful, lyrical, acrobatic; keys are sprung from, landed upon, tickled, urged, encouraged, coaxed—but rarely, it seems to me, merely struck.

The acrobatics formed a key feature of Thomas Larcher‘s Smart Dust and Francisco Coll‘s Vestiges, receiving its first performance. Both drew liberally on the relentless slip-slide mayhem typical of Nancarrow, in Larcher’s case with more emphasis on playfulness. It was a level of play (practically Zappa-like) that seemed to defy Larcher’s own programme note, which speaks of giving the piano “a sound with a sense of urgency, of desperation”, with a related desire to “hammer against … conventions”. Not with music as ordered as this—but to be honest, considering how much fun it all was, who cares? Uttley’s negotiation of the material came across like a frantic game of cat-and-mouse played by independently-minded hands, both locked into the same underlying groove but falling around all over the place nonetheless. Coll’s approach was similarly ordered structurally, book-ending Vestiges with wild episodes of virtuosic canons and counterpoint with a heavily contrasting central movement, very delicate and light. Overall, it makes a somewhat curious aesthetic statement, but again, the untamed fire of the outer sections makes the question marks hanging over the piece seem less significant. Tristian Murail‘s La Mandragore, which closed the recital, proved to be my undoing; about two-thirds of the way through the piece, i realised i had been seduced by its swirling, intoxicatingly fragrant harmonies, entirely distracted from what was actually going on. But then, i wonder whether Murail might actually be quite pleased with that reaction. Less conventional were the new works from Michael Cutting and Naomi Pinnock, both also world premières. In Cutting’s This Is Not A Faux Wood Keyboard Uttley turned percussionist, using various mallets to strike the instrument (both its tone bars as well as elsewhere), the sounds being looped into interesting textures, encompassing an ambient soundscape, pitch-based interplay and a wild noise-filled finale—but in a nice touch, the work ends by allowing this immense cluster of piled-up action to resonate for a while, eventually emphasising the regularity of the loops, order thus emerging out of apparent chaos. Pinnock’s Lines and Spaces comprises six miniatures, inspired in part by the paintings of American abstract artist Agnes Martin. Each Line was impressive in the courage of its simplicity: a sonic line extended by a rapidly repeating single pitch, coloured by a simple octave doubling, adjacent pitches, or a resonant chord, with the pedal brought in occasionally to smudge things. The Spaces occupy bigger environments, inhabited by calm, measured droplets of harmonic colour like blobs of ink falling into water; the first and last were pretty, but the second was immersive, seemingly expanding to subsume the performance space, filling it with a complex constellation of drifting celestial bodies. Beautiful.”