Michael Cutting‘s This Is Not A Faux Wood Keyboard is probably the most unusual piece I’ve had written for me so far, and it had an interesting way of coming into being too. A year or so ago I spotted a photo Michael posted on Facebook (below) of an instrument he’d bought himself, a Fender Rhodes MK1 Stage Piano. Several months later I found myself thinking again about Michael’s post, and the idea came to me to ask him to write a piece especially for the instrument. I’ve loved the Rhodes sound since a period in my teens spent immersed in Stevie Wonder albums; and I’ve been interested in Michael’s work since we met in 2013 through New Dots, where I played his trio when the world is puddle-wonderful with Joshua Batty (flute) and Anna Hashimoto (clarinet). 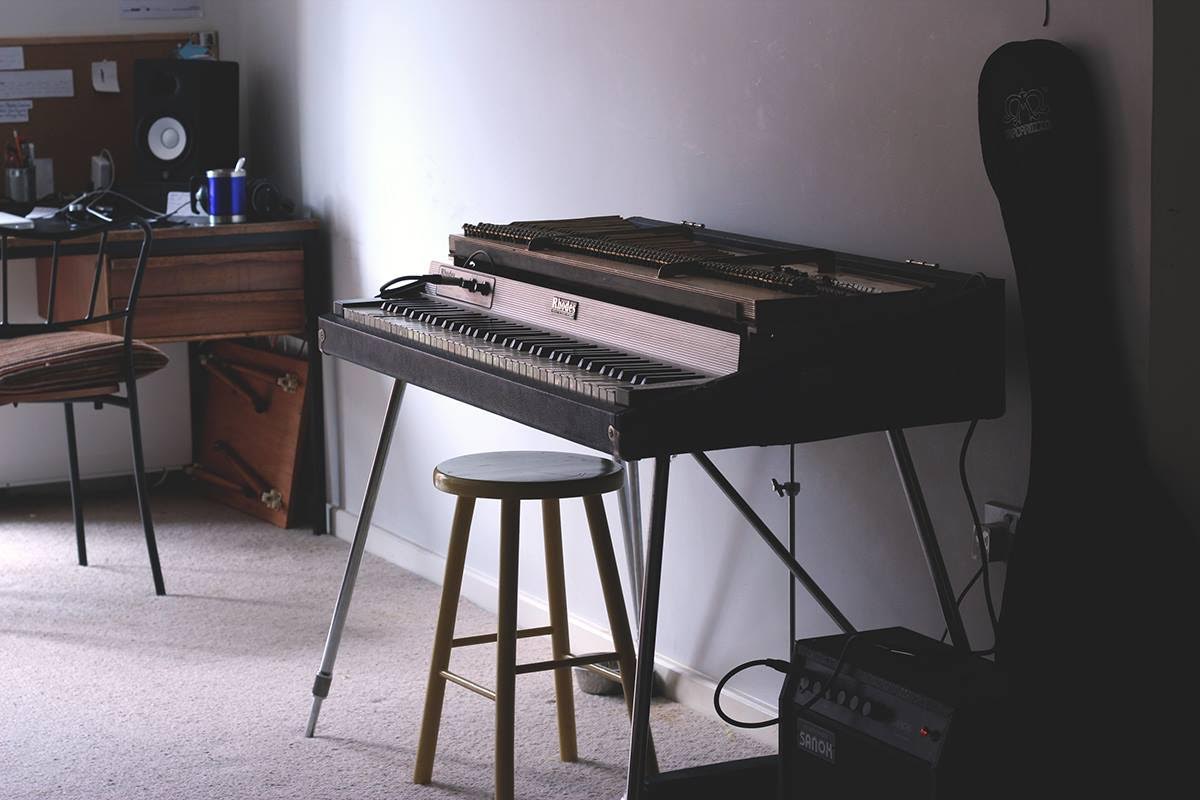 When I asked Michael about the piece I had originally intended something for Fender Rhodes, but as Michael wrote it became apparent he was writing for specifically his Fender Rhodes. Its quirks – a particularly resonant tine (the metal bars its hammers strike) here or there, the odd harmonics caused by the faulty dampers on some bass notes, the growl of certain pitches – are essential elements of the work’s sound palette. There was really no other way a composer like Michael would have approached such a commission; here is an artist fascinated with the craft of making things, and ‘imperfections’ are what give these things their beauty and depth. His partner Vitalija Glovackyte is similarly creative (together they founded Another Contemporary Music Ensemble), and spending time in their flat while working on the piece was akin to visiting an exhibition of works in progress. I saw such things as homemade instruments, a suspiciously large collection of cassette players, wooden bowls carved from logs, a reel-to-reel tape recorder, prints on tissue paper, and a pet rabbit named Rabbit.

More than ever before for me in collaborating with a composer, it was through working with Michael that I really learned the piece. One of the particular challenges was finding a way to ‘make chamber music’ with the delay pedal the piece uses. The material the pedal generates is all derived from what you feed into it, but its behaviour is to an extent unpredictable – and so it took a while to get to a point where I felt I could meaningfully interact with it, and then more time again from there to feel I could mould the sound as Michael intended. Other new skills I had to rapidly acquire included using mallets to elicit beeps, rustles and clangs from the Rhodes, and finding the most expressive way to turn its volume knob… Working on the piece was to enter into a state of deep listening and quick-reactive alertness – each time leaving me with my hearing slightly altered.

This Is Not A Faux Wood Keyboard was commissioned by Huddersfield Contemporary Music Festival 2015 and was premiered at the festival. It was recorded for broadcast on Radio 3 as part of the Hear and Now series.