Review from Kate Mackin for Vancouver Classical Music of my concerts in Canada earlier this month.

Following on the momentum gained from hosting the ISCM World Music Days in 2017, David Pay and Music on Main continue their 5-day Modulus Festival this year, featuring a rich diversity of artists and offering an excellent sampling of what is current in the world of new music. It usefully complements Vancouver New Music’s ‘Quartetti’ extravaganza of two weeks earlier (24 contemporary string quartet compositions played by seven ensembles) in bringing a heightened new music inspiration to Vancouver’s fall season. Fluidity of form and genres defined the Modulus Festival’s musical offerings, and attention was drawn to musicians who are both composers and performers. Opportunities for mingling between performers and the audience was also an important aspect of the festival. Among the many notable events, Music on Main’s Composer-in-Residence, Nicole Lizée, teamed up with British composer/vocalist Laura Bowler to present a concert of chillingly insightful music, singer and medieval scholar Katarina Livljanić performed Kokla Kokabula, while Eve Egoyan presented dramatically-staged pieces for piano and electronics. Two of the most inspired concerts were by young British pianist Richard Uttley, and the Standing Wave Ensemble contributed their inimitable expertise at the end.

Of the three venues used for the festival, the smaller and more intimate settings of Studio 700 at CBC Vancouver and the Post at 750 produced some of the most inspired concerts of the festival, in particular the performances by pianist Richard Uttley, who has been in the UK spotlight since 2010. His first programme ranged from Eric Wubbels post-tonal Psychomechanochronometer (2013/15) to Naomi Pinnock’s incredibly fun exploration of the overtone series, Lines and Spaces (2015), and culminated in the excruciatingly refreshing, microtonal Ein Schattenspiel (2004) by Austrian Georg Frederich Haas. What I loved about this programme is how much of the emotional payload of this music comes from its temporality and patterned structure as opposed to its harmonic resolution. Uttley’s touch is perfect for such minimalism: he is sensitive and clearly given to introspection, and there is a cleanness and modesty to his articulation. Uttley’s second concert was an intimate and frolicsome affair presented interestingly enough in the Music on Main office canteen. It was most notable as an introduction to the music of Mark Simpson, whose Barkham Fantasy (2009-10) came off as a revelation, a sure cure for the ennui that ails you!

And from Joe Bates:

There was a wonderful selection of British music brought over to Canada due to the festival’s collaboration with hcmf//. Richard Uttley’s concert of piano music with electronics featured Michael Cutting’s superb I Am A Strange Loop Vb. I’ve listened to a lot of Michael’s Strange Loop series but never had the chance to catch one live. It’s an astonishing enhancement of already very rich music. The physical delicacy, the awkwardness of the analogue machines (reel-to-reel tape, Fender Rhodes etc.) adds a thrill that is hard to grasp in recording. When in the room, the tape-button clunk that ends the piece feels like more of an intrusion than it ever could in recording. Haas’s Ein Schattenspiel was a wonderful discovery for me. A pianist plays with his own echo, a precise duet with a lag that gets closer and closer in time while always remaining a quarter tone away in pitch. Richard’s performance was mesmerising throughout, but never more so than in the furious (“RSI inducing”) ending to this piece. 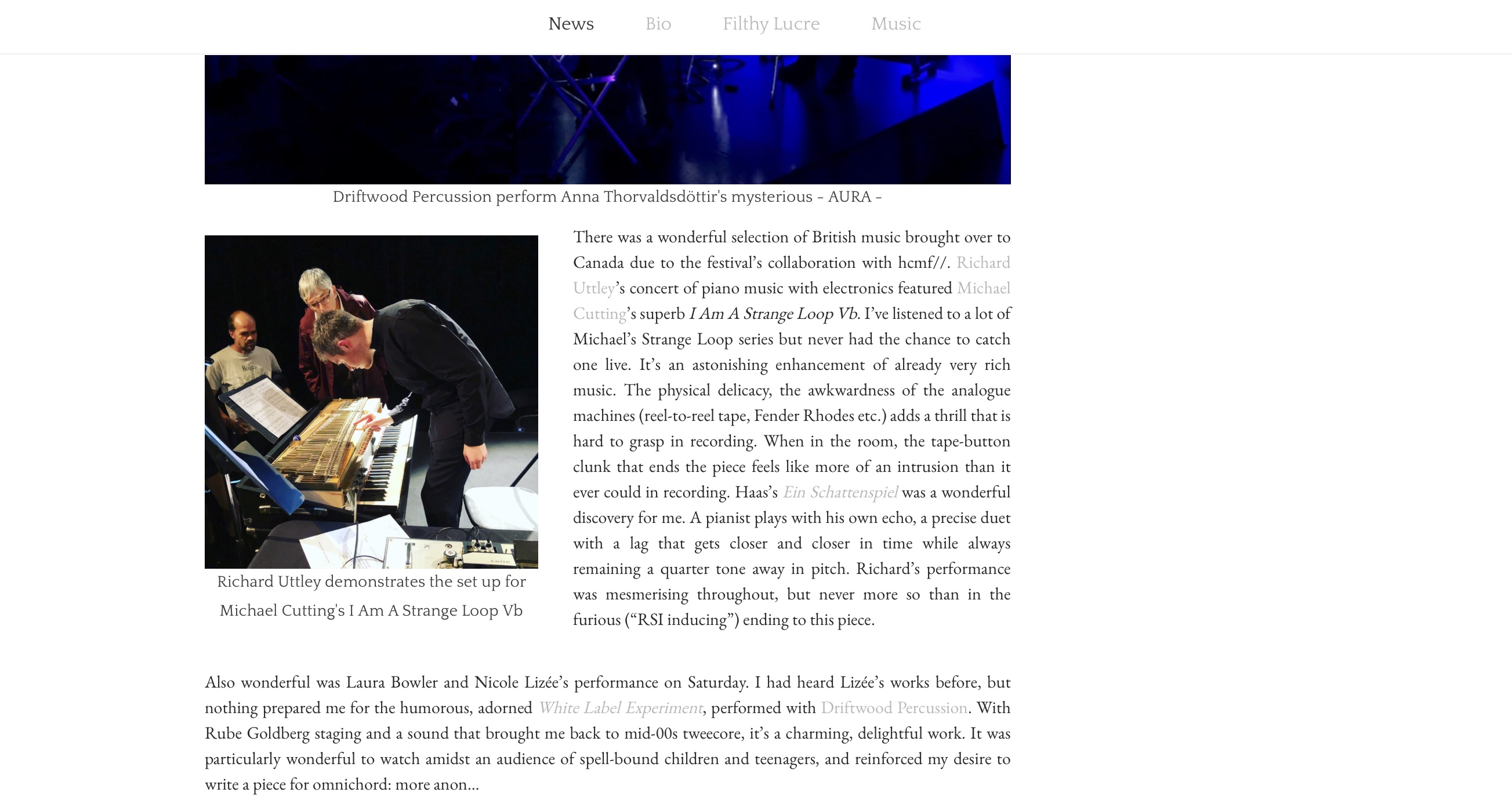