After playing Stravinsky’s Rite of Spring in the carpark in Peckham last year, Kate Whitley and I devised an expanded piano duet programme for our concert at En Blanc Et Noir – a magical outdoor festival in the village of Lagrasse, France – this summer.

Alongside the Stravinsky, we included music from two other ballets: Milhaud’s Le bœuf sur le toit and Satie’s Relâche. All three works were premiered at the Théâtre des Champs-Élysées in Paris (pictured below) – the Stravinsky in 1913, the Milhaud in 1920 and the Satie in 1924 – and as such they give a fair indication of what an extraordinarily creative time and place that was. The effects of World War I are acknowledged only obliquely; the Milhaud and Satie are both farcical, typifying the Dadaist mode of mischievious playfulness that was their way of protesting against the bourgeoise intellectualism they saw as a root cause of the war. 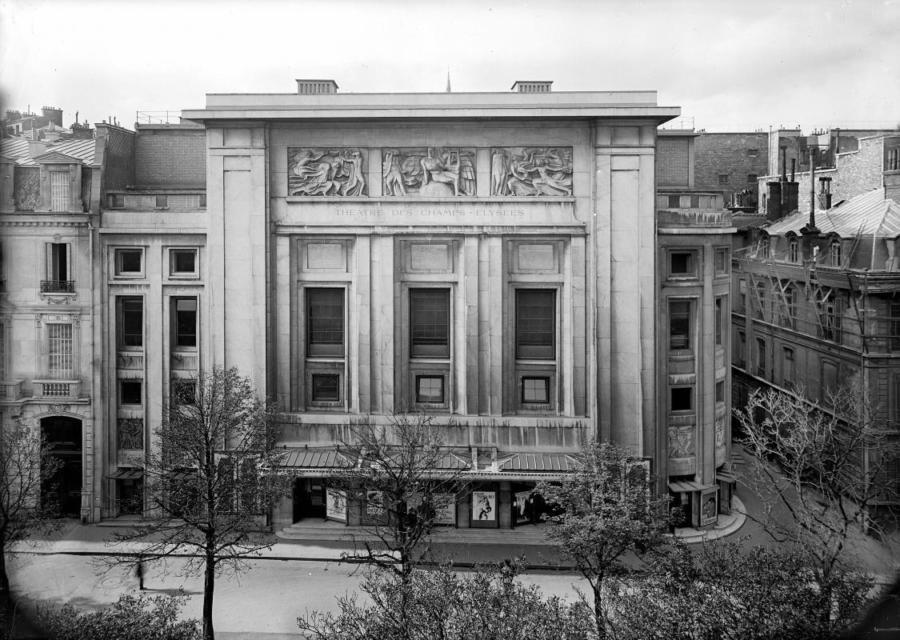 The Rite of Spring has overwhelming force in the orchestral version, and though the piano duet version can’t quite compete in terms of scale and volume, it has a power of its own through the sense of a single instrument bursting at its seams to recreate this extraordinary score. It’s also totally exhilarating to be part of a two-player team making this music that would otherwise require over a hundred musicians. In fact the piece’s first incarnation was in this piano-duet form. At a party in 1912, Stravinsky invited Debussy to join him at the piano and read through the completed parts of the work; one guest later recalled, “We were dumbfounded, overwhelmed by this hurricane which had come from the depths of the ages and which had taken life by the roots.” 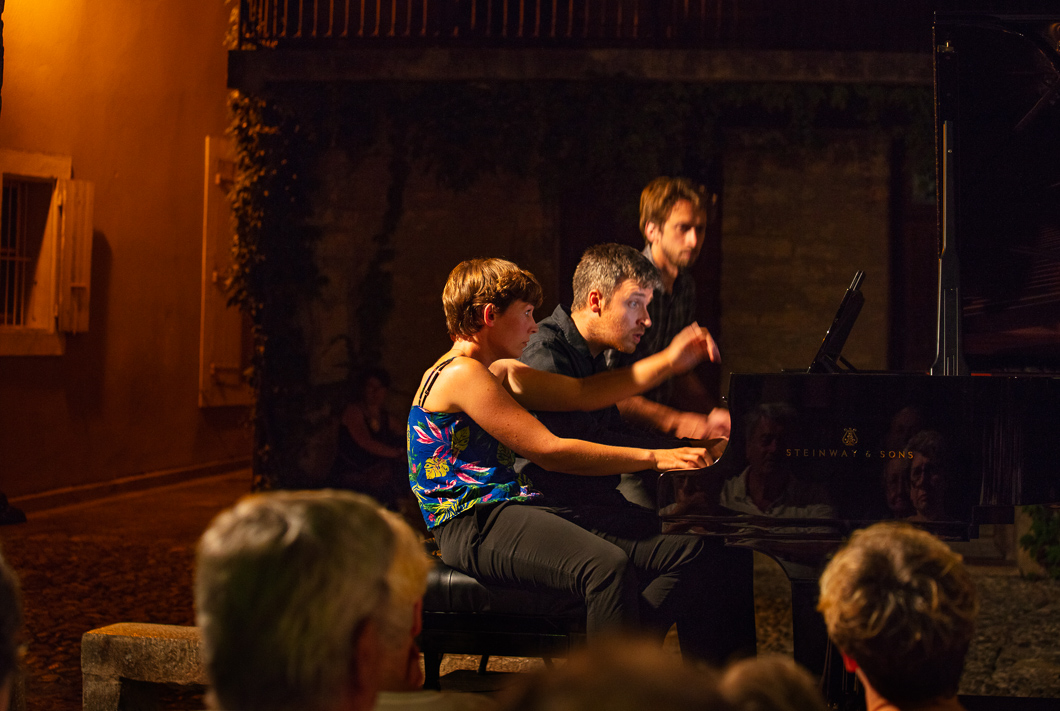 Milhaud’s Le bœuf sur le toit takes its name from a tango Milhaud heard during a period spent in Brazil and that’s heard throughout the piece. Milhaud said he felt the music well-suited to accompanying a Charlie Chaplin film (and subtitled the piano duet version Cinema Symphony on South American Airs), but before this idea could be realised Jean Cocteau appropriated the score for a ballet. The raucous and entertaining piece gave its name to a cabaret-bar that opened in Paris in 1921 and played regular host to Cocteau and his circle. 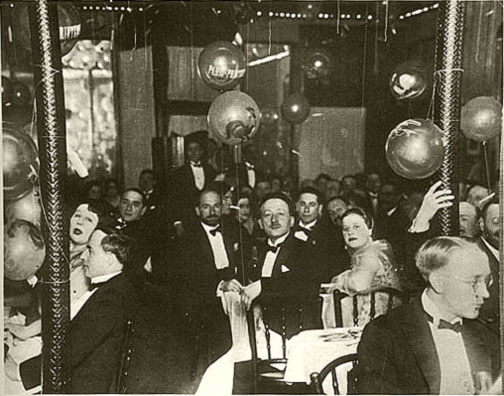 The closing work in our programme was from Relâche, Satie’s ballet with choreographer Francis Picabia. We took the music from the so-called ‘Entr’acte’, a film by René Clair that’s shown as part of the ballet. The opening sequence – in which Satie and Picabia are seen on a rooftop in Paris firing a cannon at the audience – is shown before curtain, and the remainder is shown between the two acts. Everything about the film and ballet is subversive – even the titles are misleading, “Relâche” being the standard way of indicating a cancelled performance, and “Entr’acte” of course meaning ‘interval’. The film is a visual delight of surreal, wryly-conceived imagery and imaginative nonsense: people are shown running in slow motion, a dancer is filmed from beneath, a mock-serious funeral march is led by a camel, an egg appears to hover above a fountain before being shot and transforming into a bird. There are cameos from various eminent artists of the time – as well as Satie and Picabia, Man Ray, Marcel Duchamp, Georges Auric and René Clair all also appear.

The practicalities of performing this piece gave Kate and me much to think about. Milhaud – in a nice connection with the previous piece on the programme – made an arrangement for piano duet of most of the orchestral score (we filled in the other parts ourselves from the rehearsal reduction of the full score), but the precise synchronisation with the film is loose and we whiled away many an hour experimenting with this, discovering how we could coordinate with a dancing doll here and a tumbling coffin there. Satie’s music features a lot of repetition, and so is fairly easy to manipulate in order to gain or shed a few seconds here and there if the tempo of the particular rendition has been slightly quicker or slower (obviously the film’s ‘tempo’ never varies); but being able to agree this between the two of us on the fly was quite a different matter, and working out how to do this occupied much of our rehearsals. We also found it advantageous to add repetitions of whole sections of the music – in order to allow for more lively tempos – and were reorganising exactly how we did this up until the final rehearsals. We decided to play from iPad to avoid the flapping pages of a paper score – the square in Lagrasse is prone to unpredictable gusts of wind – and so our annotations ended up being multicoloured, though whether any of these will be comprehensible to us when we return to the piece next year remains to be seen…

We were inspired by the idea of pianist Alexei Lubimov (who together with Alan Newcombe performed this piano duet version with film at the 2016 Satie Festival in Hamburg) to prepare the piano à la John Cage, involving rubber wedges, coins, tin foil and blu tack. The resulting effect – bizarre and surprising – seems to me not only to complement René Clair’s film but also to intensify the Dadaist qualities of the music in a manner of which I feel confident Satie would have approved. 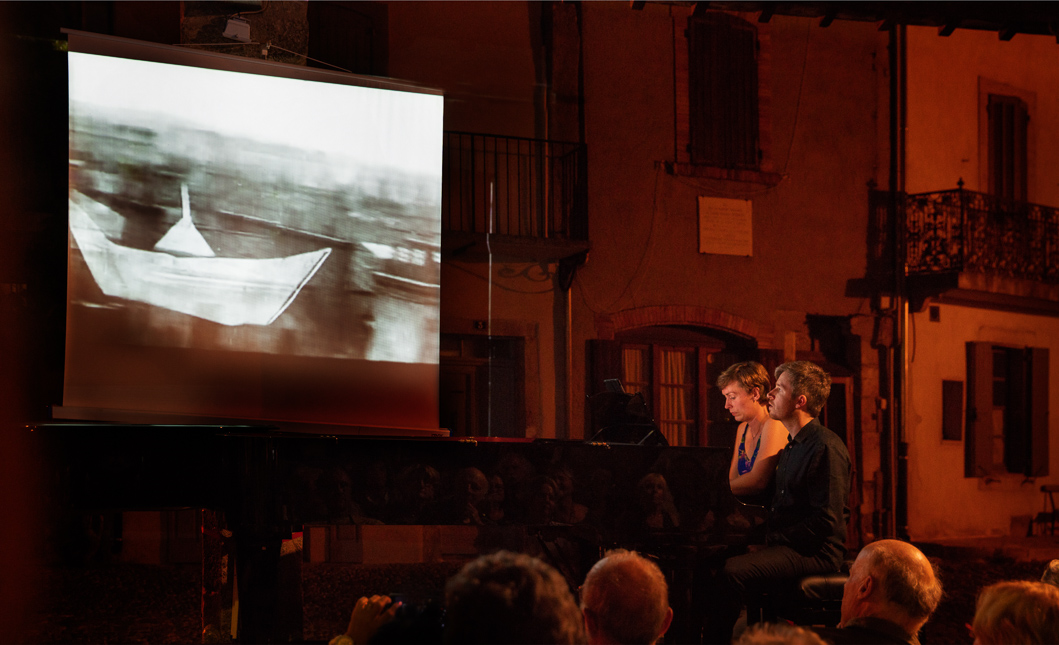